I thought that since I cooked like a crazy person for the past few days, I would make something easy for dinner tonight.  My dear friend Anne had sent me this recipe a few weeks ago, and I kept promising to try it.  Of course, living in upstate New York, finding Rotel tomatoes with Lime and Cilantro is not an easy task.  However, after much searching, I did manage to find Rotel tomatoes with Green Chiles, so I thought, okay, let's try it.  I bought a pork butt that was as big as my own butt, and on the night I decided to cook it, my husband ended up in the delivery room, and having had gastric bypass surgery, I didn't think I could quite handle an 8 pound pork butt  by myself (which was the smallest one I could find - must be the weather up here, makes you too lazy to go outside, so our butts are bigger than in Texas, where Anne lives :)   8 pounds of pork could probably feed me for about 14 years, lol.  Anyway, since two of my boys were home for the holidays, I thought it would be a good meal for after Christmas.  I must also confess that I had an ulterior motive for wanted to make this recipe, Anne also gave me a recipe for a Cuban Pork Pie that is made with the leftover pork, and I must tell the truth, that interests me even more than the shredded pork alone.
Last night, or should I say early this morning (about 4:30 am) before going to bed, I got my crock pot ready, lined up my ingredients, and set my alarm for 9:00, as I decided to sleep in a little (even I need about an hour or two of sleep every fourth or fifth day.)
Nine o'clock rolls around, I roll out of bed, and roll into the kitchen, and prepare to meet my butt head on.  No problems, one, two, three, and by 10 o'clock, I am crock potting away.  I get everything in the pot, turn my controls to high, and start to do a few chores.  My son finally wakes from the dead at about 11:30 and decides he wants something to eat, (like all the leftovers from last nights dinner) so I start to make hash browns, steak and eggs.
Funny, I think to myself, I smell the onions from the hash browns, but nothing coming from the direction of the crock pot.  Hmmmm maybe I should take a look, it looks good, but something is off.  I mosey a little closer, and where I should be feeling heat, there is none.  Well, needless to say, the pot was turned on, but alas, it does work better when it is turned on and plugged in as well...who's the butt now!!!
I must confess and own up.   I start thinking that pizza would be good for dinner tonight.  My husband said, "don't worry, I'm on call tonight until 9, so I won't be home on time anyway. My boys have been stuffing their faces with the leftovers , and yet another batch of Oatmeal Chocolate Chip cookies (if I never see another package of Nestles Semisweet Morsels for the next decade, I promise not to complain) so they won't be hungry by dinner time, so I decide to play it by ear.
Around 5:30, dear old hubby wanders in and says he's hungry...thank goodness there are still some of the dips left over from Christmas - yes Virginia, there is a Santa Claus!
Anyway, to make a long story short - it is now 10:30 and we just finished dinner.  Was it worth the wait?  I certainly think so -  Steven, Jeffrey, and Marc, ate three helpings each, after dousing it with Cholula Hot Sauce (and I was worried about the heat from the chilies.)  Now, Anne tells me she serves it with her special rice, but because my night always follows my day, could I find the recipe for the rice, nope!  I have all the recipes Anne sends me in their own folder and I didn't get a chance to print the last few out, and file them in my cookbooks.  So, I did the next best thing that lazy girls do at 9:45 at night.  I made two bags of Success Rice, seasoned it with butter and garlic salt and let it rip.
Of course, as I am typing this post, it continued to annoy me,  so I went through every damn e-mail on my computer and finally found Anne's recipe for the rice to accompany the Mexican Shredded Pork, so here it is:
Special Rice to Accompany Mexican Style Shredded Pork
Anne Murch-Gutierrez
1 1/2 cups uncooked long grain white rice
1 1/2 cups water
2 tablespoons butter
1/4 cup fresh lime juice
1/4 cup chopped cilantro
Bring the water, butter, and rice to a boil.  Mix in the lime juice and cilantro.  Reduce heat to low, cover, and let simmer 20 minutes or until cooked.  Serve Mexican Style Shredded Pork over this rice.
Well, finally, here is the recipe for the Mexican Shredded Pork.  Anne, you will be happy to know that my boys will come and eat in your Jalapeno laden kitchen anytime.
Mexican Shredded Pork
Anne Murch-Gutierrez
1 large onion, diced
4 cloves of garlic, peeled and crushed
2 cans Rotel tomatoes with Lime and Cilantro
1 Boston Butt pork roast about 5 pounds
1/2 teaspoon McCormicks Season All Seasoned salt
1 teaspoon Chipotle powder
Water
Add all the ingredients in a cold Crock-Pot.  Add enough water to cover the roast.  Cook on high for 7 hours or until meat is tender. Shred the meat with forks and serve over rice.
Ingredients you will need for the Mexican Shredded Pork: 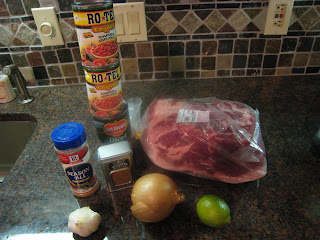 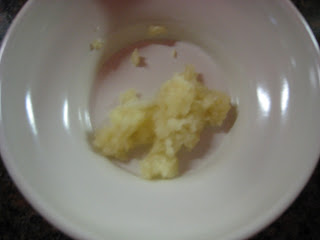 Peel and chop the onions. 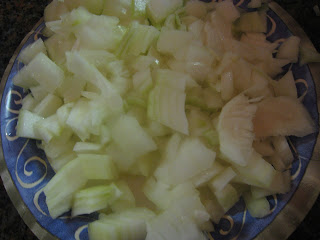 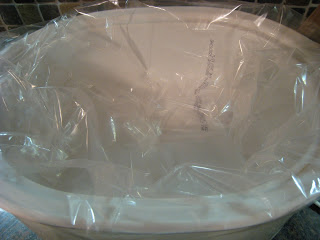 Place the pork butt in the crock pot 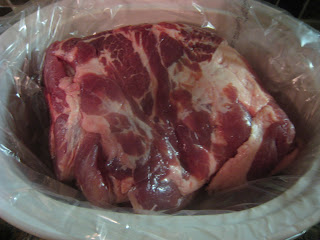 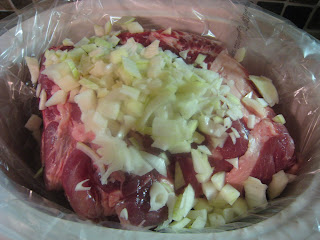 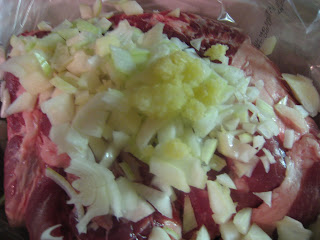 The two cans of Rotel Tomatoes 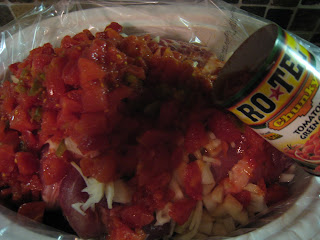 (my butt was so big (art imitating life) that
I thought I better add an extra can of tomatoes,
but what did the little (okay not so little) Italian girl
have in the house, not Rotel,  but
Delmonte Diced Tomatoes with Garlic and Onions,
so in that went too 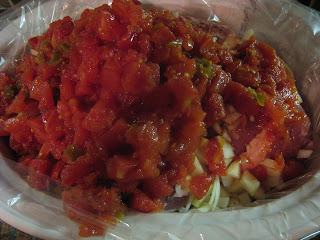 Since I could not find the Rotel with Cilantro and Lime,
I squeezed a fresh lime into the mix
I eliminated cilantro because I can't eat it,
but if you have it, by all means, put it in 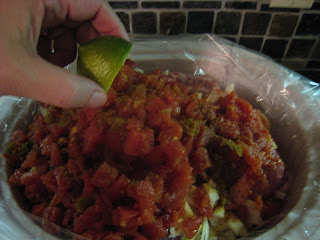 Add the Chipotle powder ( I confess, I couldn't find that either) so I
used Mesquite Seasoning instead, and it was quite delicious,
so I didn't do too badly all things considered 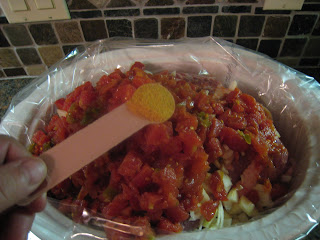 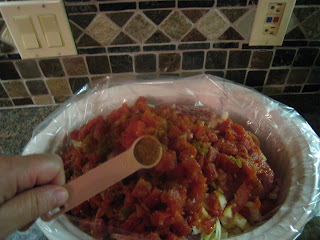 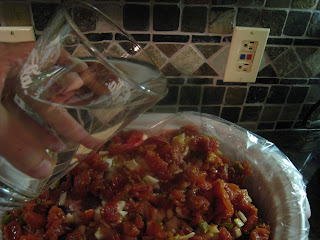 Place the lid on the crock pot 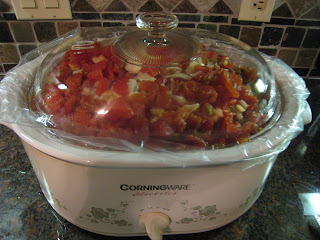 Turn the setting knob to high 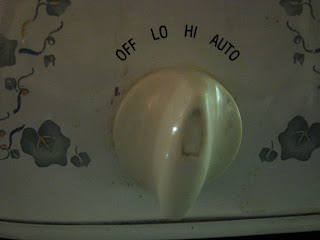 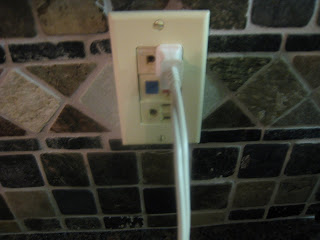 Wait about 7 hours, or in my case about 12 hours, and then carefully
remove the meat from the liquid. 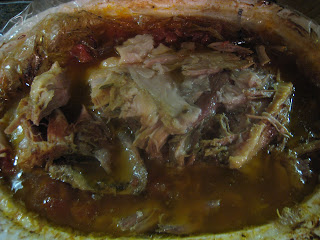 Remove all the chunks of fat and discard 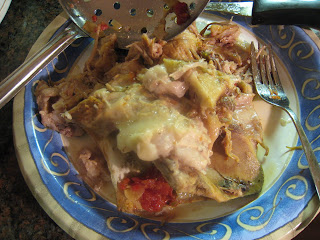 Place the meat in a serving bowl 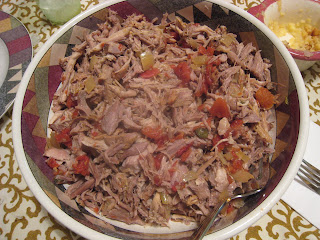 Serve the liquid from the meat at the table and place some over the meat
Serve over rice and enjoy! 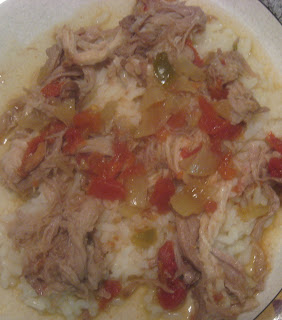 With much thanks to Anne Murch Gutierrez who
laughed me through this whole week, I hope I did you proud!

Posted by Foodfanataholic at Friday, December 26, 2008 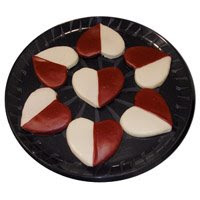